De La Soul’s Maseo to play Pyramid.
The cat’s finally out of the bag. 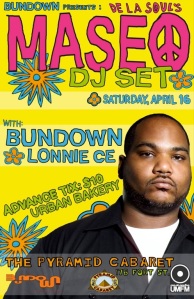 As mentioned in previous posts and Twitter blasts, we have been sitting on a show that we’ve been dying to announce and so without further ado, we are proud to announce that MASEO aka Plug 3 will be gracing the stage of the Pyramid on April 16.

He will be joined by QUADRATIK, JAY BOOGIE, OFIELD K, LUCIOUS and special guest LONNIE CE (THE LYTICS, Grippin’ Grain).

Advance tickets are $10 and will be available at The Urban Bakery (shout out to Kev!) and door admission is $15.

At the same time, don’t forget that DJ TAKTIKS will be our special guest at M*O*V*E this Saturday, April 9 at The Orbit Room! Taktiks has been holding down Toronto’s CKLN 88.1FM for a minute now with his Mixtape Massacre radio show. He’s a true music lover and he can always be found spinning at clubs, lounges and parties in the GTA. Last year, he played Bar Italia alongside Quadratik and left a lasting impression! Ofield will also be holding down Calculated Soul Live at Lobby On York, so you’ve got a double BUNDOWN flex this Saturday!

Studio54 is also fast approaching and will take place inside 6 Degrees Martini Bar & Wine Lounge on Good Thursday, April 21! We’ll be welcoming back our homey MAVRIK (Dangerous Goods Crew) on the decks that night, as well! Word is spreading and folks are anticipating a night of disco from the 70s to nu disco!

Finally, if you don’t already know about the RAEKWON show on Saturday, April 23 at the Pyramid, then we should inform you that the show will be opened by FILTHY ANIMALS, DJ CO-OP and our very own Boogz! Rae is touring to support the release of the latest Wu banger, Wu-Tang vs Shaolin, which you should cop immediately via your fave music source!

That’s it for now…see ya on the dancefloor!

P.S. A new addition to the BUNDOWN fam will be making his debut in the near future…;)