Been a min since the last update – uknowhowedo…the hustle don’t stop.

First off, shouts to all the adventurous souls who have been reaching the warehouse jams! A lot goes into these and every new face we see keeps the momentum moving! The last one featured an incredible battle pitting Dangerous Goods Crew against Paranormal Pandas Crew and a set from burgeoning soul/funk outfit, Sleeping Giants. You don’t see this just anywhere in the city, truss. For info on any of the warehouse jams, you need to holla at us – if you don’t know about the hotline. 😉

Next up, we’re sitting on crazydope returning concepts: M*O*V*E and Studio54! That’s right, ch’all, they’re comin’ back! Anyone that frequented M*O*V*E at The Academy knows this jam is straight up soul, funk, disco, boogie and house dropped on the 1s and 2s! Studio54 debuted at Alive In The District a couple of years back before being taken on the road to markets out west and will return inside the brand-spankin’ new 6 Degrees lounge in the Exchange with generous helpings of disco from the 70s – now (yes, people still make disco) & like previous installments, you’re only limited by your imagination re: dress code!

There are a couple of other shows we’re sitting on that we’ll leave out of this post – for now. Just know that they’re big and they’re going to be barn-burners! Strictly for the musicLOVERS! 😉 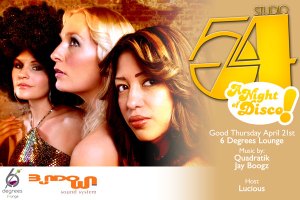