The dungeon dragon offers his two bits on Rhianna and Brown.

Busta Rhymes is asked by the interviewer to weigh in on the Chrianna situation at 3:20 of the video. Anyone believe he was clueless on what happened – especially when it made post-Oscar headlines across North America and was ALL over Twitter?

“I’m pro-defending yourself…under any circumstances – whether it be a man or a woman. Youknowhatimsayin’? But I’m never pro-hitting a woman,” said the rapper.

Is “pro-defending yourself” some new slang term for self-defence?

He goes on to say “even understanding the circumstances with them being who they are…as celebrities…I just feel like everyone need to mind they f**kin’ business”.

Someone should tell Trevor Smith that being a celebrity means throwing your privacy to the dogs. He muses over things like the Officer Ricky/Fiddy “rivalry” – which no one really cares about, the Oscars and his album drop date but we all know which topic has more heat right now.

It’s not likely that Busta will be the only high-pro industry figure to be asked about Chrianna’s woes. Upper Playground and Munk One have expressed their opinion quite succulently with THIS tee!

The Ike Turner of this What’s Love Got to Do With It scene, meanwhile, has begun taking anger management classes in California. Gotta look good for that March 5 trial date, Chrissy?!


Highplace Drive is a new project from my homegirl Masia One and her frequent Cali collaborator Sabatawj. M Uno reps the Dot – obviously – but is currently in San Diego doing what dope rappers do; make dope music. This joint is a good example of what she’s cooking up.

Her album, Pulau, made a nice impact on Canadian college radio. It went to #1 last month on exclaim!?‘s earshot! chart.

And, to show a little extra love, here’s showcase footy of her tourmate DJ Sarasa from the 2008 Technics DMC Japan final (note the irony of a DMC showcase using Serato):

Keep up with Masia HERE. Check those choreographed pieces set to Masia choons from Europe!

Gotta give it up for the one DJ Fase – yes, he of Toronto’s long-running Footwork Tuesdays residency – who remixed this new Jazzanova joint something sweet! He’s also the one that took Ivana Santilli‘s Whateva U Want and turned into a Lover’s Rock sonic landmark. Jazzanova has flipped their well-known broken beat/nu-jazz stylee into a more soulful sound and Fase doesn’t stray far from the new ‘nova steez.

…and, HERE is Fase’s remix. You can check out his Myspace, too. Cop it and drop it!

Oh, and because we love us some Ivana, HERE‘s Fase’s Lover’s Rock Remix for Whateva U Want.

As part of the Madvillainy/Jaylib tour THIS little nugget incl an unannounced appearance by recent LA transplant, James Yancy!

For all my Cdn heads, they also posted THIS from the 2007 Ruff Draft release party in the Dot, which feat J.Rocc on the turns and hosted by Frank-N-Dank

(photo jacked fr my homie, Hza‘s blog bc i never got one of these).

And so we begin.

U2 opens the show with their new joint, Get on Your Boots. Bono gives the post-performance introduction to… Whitney! Who comes out looking a little worse for post-martini wear! A little dap to Clive (Davis) for his Industry Icon Award before announcing the noms and winner of the Best R&B Album, which goes to J-Hud. Having a little trouble getting the winner’s name out, Whit-Whit? Clive’s post-Whitney project giving Whitney the “I’ll pray for you, girl” hug. Think everyone wants to see her take this, considering how the past few months have gone for her.

Justin drops science on how Al Green taught him soul then attempts a boob of a joke about “The General Store”. Introduces Boyz II Men, Keith Urban and the good Reverend to join him for the requisite tribute. How predictable. Let’s Stay Together? You guessed right? Did these guys do soundcheck together? Timing’s a little left of the accurate margin. But did you hear the good Rev sustain that key? Urban freaks a respectable guitar solo to make his appearance worthwhile. Boyz II Men get no leads – strictly background. Kinda like their career right now. [this segment had been thrown together at the last minute to fill this segment because Rihanna cancelled her appearance…check the official word here] [02/10/09 UPDATE: this is the final update because there’s nothing more to be said about Chrianna-gate!]

Simon Baker? The prop to introduce one of tonight’s heavyweights, Coldplay. Chris & crew bust out and (predictably) Jay-Z joins them to drop a new verse for Lost. Never saw THIS coming. Really. And, of course, Viva La Vida to finish.

Carrie Underwood performance. Don’t know that I’ll give this much commentary. Nope. Not gonna.

Sheryl “I Didn’t Put Any Thought Into This Dress” Crow and Lee Ann Rimes give props to some ole country gal before going into the Best Country Duo/Group noms and winner. Bathroom break. Oh, Sugarland apparently won. Weren’t they a Cdn blues-rock band from AB? Or was that an album by Honeymoon Suite?

Duffy and Rev Green singsong into the noms and winner for Song of the Year. They should never work together. Ever. Wonder how she feels announcing Adele and Estelle as nominees…*whew*…dodged the bullet of having to hand one of them the award. Coldplay takes this one.

Kid Rock hits the stage. Yes, he was mentored by D-Nice. Don’t know who I was dissing there. Pulls this bluesy rock off a lot better than the CN Tower hightop fade he used to sport.

Oh, snap. J-Hud centre stage. Not a dry eye around. Can’t front – You Pulled Me Through performance is moving. 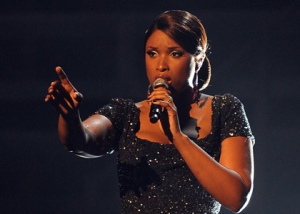 Le, sigh. Stevie onstage with The Jonas Brothers. Typical Grammy flub. Someone please shoot les Jonas for BUTCHERING Superstition. This is making my bones ache. I hate the producer.

Hey, it’s Travis Barker and those guys from the All the Small Things video. Present Best Rock Album to…Coldplay. They’re kinda owning this.

Wow, did the writers drop the ball for Craig Ferguson. Those one-liners bricked. He segues into Katy Perry – who drops her big kissing song.

Whoa, right into Kanye who drops his first verse, adlibs, second verse and more adlibs off American Boy. Oh, Estelle is performing, too. Love that girl. I meant Estelle. 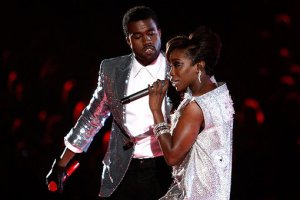 That was the intro to the Best New Artist category. Wow, Jazzmine Sullivan got a nom! No, really! Ooh, Adele knocks out all the other UK-based soul-pop sang-ers. Take a shot for every expletive that’s coming out of Amy Winehouse‘s mouth right now.

The distinguished Morgan Freeman stumbled on the word ‘pirate’. And proclaimed his bromance with Kenny Chesney. Anyone need a drink?

Puffy, Herbie Hancock and Natalie Cole just strolled out to announce the Record of the Year winner. WHOO! MIA nom! Plant & Krauss again. What are Herbie and Puffy laughing at?

Khadijah…sorry, Latifah is out to introduce the big Swagga Like Us collab (Best Rap Song, Best Rap Performance) with prego-licious and lyric-mouthing MIA, the Weezy and Yeezy man dem, the Hova-nator and soon-to-be-Akon-ed T.I.

A very capable Sir Paul McCartney breezes through I Saw Her Standing There backed by Dave Grohl, a stuffed dog and the rest of the band. I envy Grohl. He’s backing a Beatle. Rippin’ it, too.

Bad chemistry introduction by Uncle L and his groupie for Sugarland and Adele in what can only be another Jonas/Stevie-like conundrum. Sugarland done come a long way from Medicine Hat! Collective sigh let out when it was clear they were performing separately. Hey, what’s Ricki Lake doing onstage?!?

Ladies and gentlemen, Gwyneth Paltrow. Next up – after Apple’s moms finishes her mythologizing – Radiohead with the USC marching band! Is Thom Yorke epileptic or channelling Axel? Still, a strong performance all ’round. ‘kay, I’m getting goosebumps. Maybe I need to check these guys live… 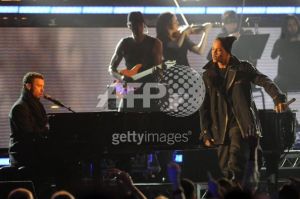 Oh, yeah, baby, it’s Jedi Master Mace Windu! Proclaiming HIS bromance with JT (who knew all these folks would out themselves at an award show)! Timberlake on keys to set off his Dead and Gone performance with TI. Really, though…rapping over your lyrics on the Grammys, dawg? They’ve turned this into a rock opera. I like Clifford Harris, Jr and I’m glad Warner had the sense to release this as a single but did he have go out like Meatloaf?

Josh Groban comes out to intro Neil Diamond. Hey, remember when he starred in Saving Silverman with Steve Zahn , Black and Jason Biggs? Yeah, that was more entertaining than this Atlantic City-style schmaltzfest of a performance for Sweet Caroline. Yuck.

Montage of many greats who have passed on. Hate this part.

Nice. Robin Thicke and Lil’ Wayne kickin’ it soulful-like with Tie My Hands. And, Weezy’s giving it to us really good – even if you can hear that annoying backing track. And now joined by Allen Toussaint on keys and the Dirty Dozen Brass Band! They smilin’ down in N’awlins. What?! Terence Blanchard, too! This was rollicking!

Will.i.am and T-Pain are out. They look like siblings. Will looks like Taboo, too. Noms for Best Rap Album with the award goin’ out to…FYI: all of the noms deserve this…The Carter III! Take another shot if you called the ubiquitous white tee for the acceptance speech.

“And now for our hastily scheduled chronic break.”

Anyone could have seen they would bring out Krauss, Plant and T-Bone Burnett to play material (Rich Woman, Gone, Gone, Gone) that got them Grammy lurve this year. Wasn’t bad.

Green Day on the mic to announce the winners of Producer of the Year (Rick Rubin) and Album of the Year (Krauss and Plant’s Raising Sand). The upper decks seem so enthused. Is that heckling from the upper decks? Cue polite applause.

Surprised that the closing number is All About the Love Again from Stevie. Not a bad thing. But then why wouldn’t NARAS remind you that Obama and the Grammys are one.

There, ladies and gentlemen, are your 51st annual Grammy Awards! Afterparty time! Don’t hesitate to let the feedback flow forth.

In a nod to the play-by-play coverage from Jay Boogie’s now-defunct Chez Boogie blog, he will post a live Grammy blog starting tonight at 7pm.

You can expect to read about tonight’s winners, losers, hacks, frauds, fashion victims and of course, performances.

Tune into your local CBS affiliate to watch the Grammys live and keep your browser pointed to bundown.com.

Been a minute since our last update – as you can see by the date on the post below – but mostly because we’ve been conceptualizing and planning the first quarter of 2009.

…let that whet your appetite for now.